It's coming into mandarin picking season and I love how sweet and juicy this fruit is. When using this fruit to make marmalade, I tend to use less sugar, to let the sweetness of the mandarin do the talking.

A foodie friend had gifted me a box of mandarins from her farm on the provision that I provide a jar of my homemade mandarin marmalade. When she tasted it, she told me that I had missed my calling, such a compliment and wanted a copy of the recipe. I am a fan of marmalade, especially the citrus variety. I think that the slight bitterness from the rind and sweet flesh of the citrus is what makes it.  I find making marmalade theraputic and great little gifts to give to friends and family. 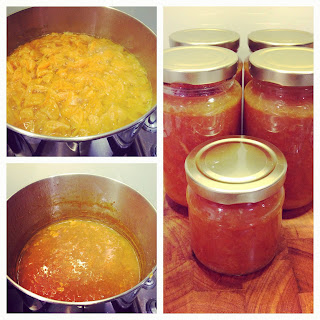 Marmalade is very easy to make as long as you get the ratio of citrus and sugar right. Or it is really up to you if you like a runny or thick marmalade. This is my trusty recipe that uses every single part of the mandarin including the pips and the pith (the white bit).

Why do I keep the pips and pith you ask, this is where the naturally occurring soluble, gum-like substance known as pectin is and pectin is what you need for the marmalade to set.

The degree to which a preserve sets is dependent upon the ratio between the fruit pectin, acid and sugar. And the levels of pectin and acid varies considerably between different types of fruits.

Getting slightly scientific on you, oranges and mandarins have high levels of pectin and medium acid levels, hence you're able to reduce the sugar content.

If you have friends that love to take all the pith off their mandarins, I recommend that you call them to come over right away to help you with your preparation. Removing the seeds and pith takes a awhile, so settle in with some tunes or get the kids to help. Don't you worry if you miss a couple of seeds, you'll find that these will just float to the surface so they can be easily scooped out. 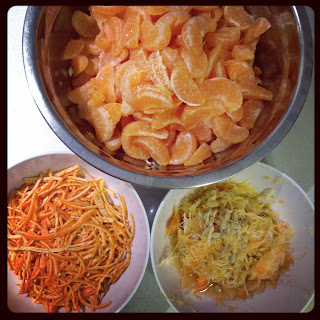 1. Peel mandarins and place segments into a large bowl. Keep the peel from at least 10 mandarins

2. Cut the peel into thin strips, (thinner is better, unless you like chunks of peel) and set aside. I tend to place 3 layers of peel of the same size and use a sharp knife to slice these at the same time.

3. Remove as much of the pith as possible and set aside in another bowl.

4. Cut a thin strip from the top of the mandarins with a knife for easier removal of the seeds. Place the seeds into the bowl with the pith.

5. Using a muslin cloth wrap the seeds and pith together and tie tightly with piece of cotton twine (used for cooking).

6. Add mandarins, peel, the parcel of pith and seeds, lemon juice, sugar, water into a large pot (something that is going to hold 2.5L at least).

7. Make sure you have a long wooden spoon as this will give you some distance from the bubbling sweetness and stir constantly over medium heat until sugar is dissolved.

8. Bring to the boil, then reduce heat down to medium and let it bubble away for about 1.5 hours, stir occasionally until setting point is reached.

How to test your setting point? 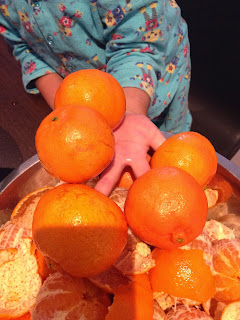 Put a plate in the freezer and chill it. Take it out when ready to test, add a dollop of marmalade onto plate. Let it stand for a 30 seconds. Then draw a line through the jam with your finger, if the line disappears, its means the jam is still runny, so keep boiling the mixture for another 5-10 minutes and test again. When the you draw a line through the jam and the line remains, your marmalade is ready for bottling.

9. Once ready, remove the parcel and discard the pith and seeds.

11. Seal when the jars are cool enough to handle which is about 10mins later.

How to sterilise jars?
This is when the baby bottle steriliser comes in handy. Or if you don't have this preheat oven to 160C. Wash jar with soapy water, rinse and shake well, place the jars on a baking tray and put in the oven. Leave jars for at least 20 minutes. If you time it well, you'll just need to take the jars out of the oven when your marmalade is ready. Seal the jar when is cool enough to handle.

You can mix up the marmalade by adding Cointreau, whisky, brandy for an adults only version of mandarin marmalade.

Fun things to do on the Weekend